GPS: 95 Circle Drive, DeFuniak Springs, FL 32435.  Panel is located across Circle Drive, then left onto sidewalk to the right of the intersection of Circle Drive and West Avenue.

The following is exact wording on interpretive panel #11 on the self-guided walking tour of the Florida Chautauqua Resort/Campus grounds opened in 1885 in DeFuniak Springs, Florida. This panel displays the history of the Chautauqua Hall of Brotherhood and auditorium on thee grounds.

Beginning in 1909, this structure and auditorium accommodated guests to the resort/campus wishing to enjoy lectures by famous people such as Vice President Thomas Marshall (Woodrow Wilson’s vice president) and world-renown attorney, orator and Democratic Party Nominee for President William Jennings Bryan. Classes were held on the second floor for those learning culinary art or other enjoyable educational programs. Visitors also enjoyed major nighttime concerts by internationally recognized musicians and orchestras such as the Carrico Orchestra which performed at many world fairs.

Resort/campus leaders designed this impressive wooden entrance to resemble the United States capitol. To raise funds to build the grand structure notable Americans like Cornelius Vanderbilt, U.S. Senators George Wetmore of Rhode Island and Chauncey DePew of New York each sponsored a column in a fundraising campaign to build a new auditorium. While the old tabernacle was still standing, Northern leaders of the resort/campus invited former Confederate Lieutenant General John B. Gordon to lay the cornerstone to this building in 1898 as a gesture of goodwill to southern area residents. Gordon commanded one wing of the General Robert E. Lee’s army just prior to Appomattox. Civil War veterans from North and South attended Gordon’s two-hour oration during the ceremony. The building was finally open in 1909, nearly ten years after Gordon laid the cornerstone.

Chautauqua leaders dedicated the dome to “the Soldiers and Sailors of the Republic,” the lantern above the dome to “the Light of Christian Truth,” and the columns on the outside of the building to the presidents of the United States. The auditorium section of the building was destroyed by Hurricane Eloise in 1975. The Chautauqua Hall of Brotherhood is the only structure on the Florida Chautauqua resort/campus grounds listed on the National Register of Historic Places. All other buildings on these grounds are “contributing structures” to the overall resort/campus grounds which are also on the National Register of Historic Places. 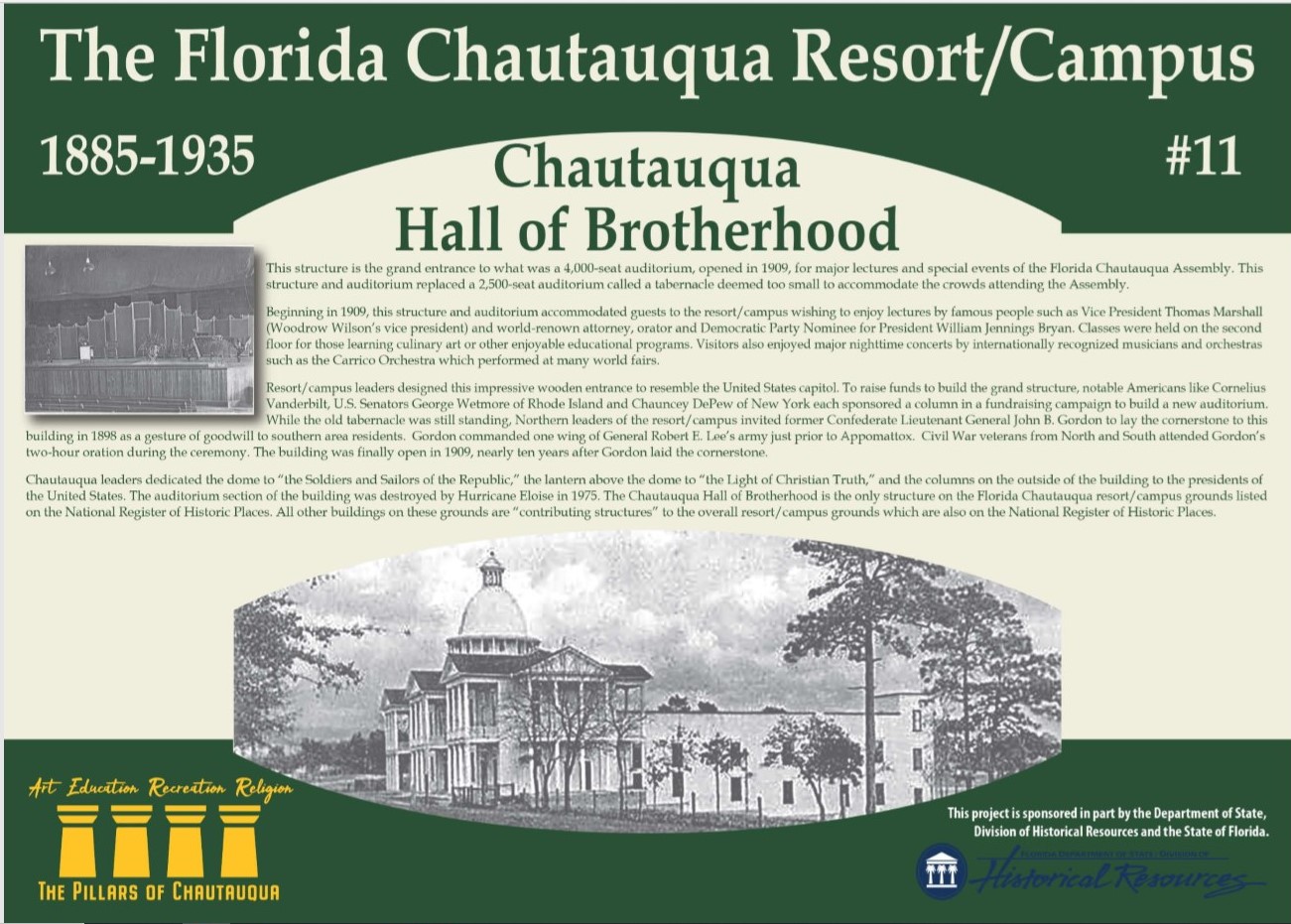